CADASIL may start with attacks of migraine with aura or subcortical transient ischemic attacks or strokes, or mood disorders between 35 to 55 years of age. The disease progresses to subcortical dementia associated with pseudobulbar palsy.
Ischemic strokes are the most frequent presentation of CADASIL, with approximately 85% of symptomatic individuals developing transient ischemic attacks or stroke(s). The mean age of onset of ischemic episodes is approximately 46 years (range 30–70). A classic lacunar syndrome occurs in at least two-thirds of affected patients while hemispheric strokes are much less common. It is worthy of note that ischemic strokes typically occur in the absence of traditional cardiovascular risk factors. Recurrent silent strokes, with or without clinical strokes, often lead to cognitive decline and overt subcortical dementia. A case of CADASIL presenting as schizophreniform organic psychosis has been reported.

IF YOU ARE INSTERESTED IN ASSISTING ME IN FUNDRAISING, EVENTS AND/OR CREATING A SUPPORT GROUP PLEASE EMAIL ARPRODESIGNS@YAHOO.COM

What is CADASIL?
CADASIL is a genetic disease affecting small arteries in the brain. It results in a reduction of blood flow to certain areas of the brain, causing symptoms widely variable from one patient to another. The most common clinical manifestations of this disease, which appear in adulthood, include migraine attacks, psychiatric disorders and cerebrovascular accidents (CVA or strokes- see later in this article), the latter responsible for troubles with speech, memory, vision etc.
The term CADASIL was proposed in 1993 by French researchers while in search of a name for this disease. It is an abbreviation in English which stands for “Cerebral Autosomal Dominant Arteriopathy with Subcortical Infarcts and Leukoencelopathy”.
“Cerebral Arteriopathy” = an illness of the arteries (blood vessels transporting blood flow from the heart to all organs) in the brain area.
“Autosomal Dominant” = How the disease transmits from one generation to another since it is a hereditary disease.
“Infarcts” = Corresponds to a sudden stop of blood flow to an area of the body which is, in case of CADASIL, the “subcortical” zone, a particular area of the brain.
“Leukoencelopathy” = Refers to brain lesions resulting from this disease
How many people are affected by this disease?
The prevalence of CADASIL (i.e. number of affected persons in a population at a given time) is not known precisely, but it is estimated at 1 out of 24,000 persons. This prevalence measure is probably underestimated.
This disease affects men as much as women. Symptoms appear in adulthood, generally between the age of 30 and 40 years but also common to be diagnosed with more advanced issues from CADASIL in your fifties and early sixties. To learn more about CADASIL please visit www.cadasilfoundation.org. As someone who loves and lives with someone with this debilitating and torturous not to mention unfair disease please reach out and get help for the both of you. Nothing can change the cold hard facts but we can learn how to cope and deal them and live & life as hard as we can. 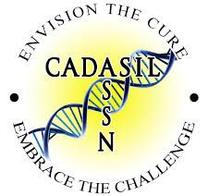